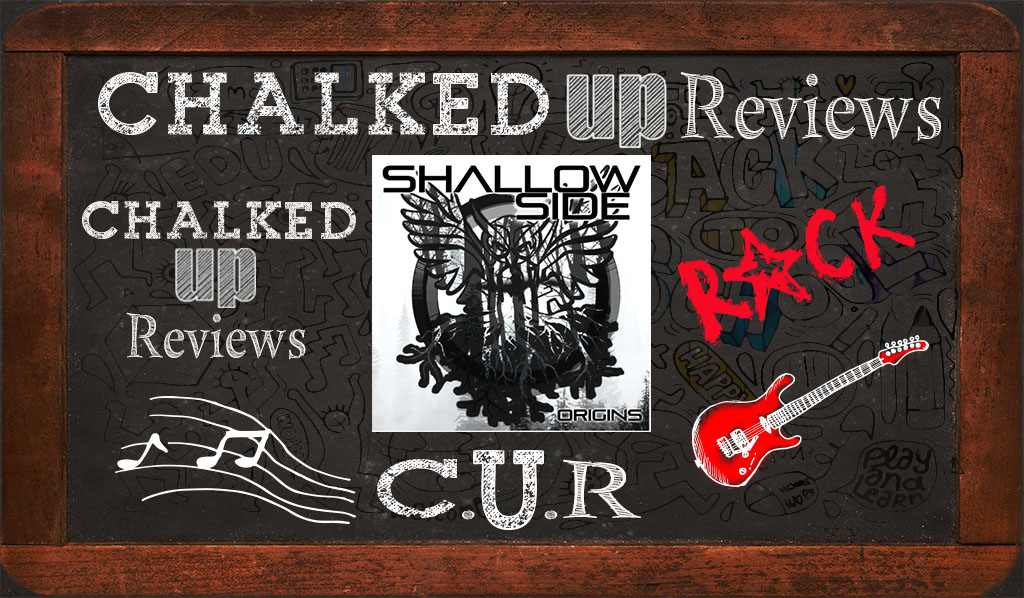 Shallow Side is a band hailing from the south, Alabama specifically in fact, and they are putting that hot humid attitude into their music by releasing a storm of furry in the progressive metal genre. At the heart of the band is aggressive guitar work over intricate bass lines and driving drums. The melodies take a cue from the pop world in that they are sing-able and distinct.  Shallow Side has crafted a new sound that takes a “no-holds-barred” attitude that has kept rock n roll alive and kicking since its inception. The band is comprised of: Eric Boatright (vocals), Seth Trimble (guitar/keyboard), Heath Fields (drums) and Matt Daniels (bass).

Origins is an eleven song release available on CD, Digitally and on Vinyl. With material coming from their previous three EPs, plus three unreleased tracks. This is also the first time that Shallow Side’s music has been offered in a Vinyl format and it is being offered as a limited-edition collector’s item. The band will be heading out on “The Resurrection Tour” starting in August, which will feature Puddle of Mudd, Saliva, Tantric and on certain dates, Soil and The Veer Union. The vocal harmonies are top-notch, and the vocal counterpoint is especially salient, we especially like the strong falsetto towards the end. Overall, this is a inordinate album.

Our favorite track is “Can You Hear Me.” Starting with the intro guitar part that has just enough edge to make rockers not hit the skip button, but not enough to make the average pop music fan do the same. The rhythm is energetic and the beat and groove that is finely developed is catchy and has a nice mix of progressive rock and “danceability/pop.” Boatright is an energetic front man and his singing is strong, he fits the sound of the band and his diction is audible and clear. The song has a clear form, good lyrics, great choruses and all the instrument parts are rock solid and kickin’. There is a nice mix of band hits, break down sections and rhythmically driving sections. The effects that are used on the vocals are effective and fit the track’s mood.

Shallow Side is a band that is on the move, and Origins is the segue for their first full length album due out in the latter part of 2018. That being said, progressive rockers will find a lot to love about their sound and those with a phobia for music that rocks to hard, will find something to like here too. The album is mixed and mastered with profound excellence. Boatright’s vocals combined with a phenomenally meaty band sound. There are no fuzzy distortions and the instruments are perfectly balanced. Play this album loud! There is a lot of attention to detail that can be missed, so repeated listens are recommended. Overall, this is a fine collection of lyrically, melodically and instrumentally rockin’ music! We are very excited about Shallow Side’s first full length album dropping in the fall of 2018 and hope the band continues along these lines for the album.

CD, Digitally and on VINYL

Report Card
C.U.R. Grades
You Grade The Music
Rate Here
Originality
A-
A
Execution
A
A
Sound Quality
A
A
Production
A
A
Songwriting
A
A
Band Sound
A
A
Vocal Quality
A
A
Art Work
C+
B+
Virtuosity
A-
A
Feel
A
A
Melodies
A
A
Riffs
A-
A
A-
C.U.R. Grades
A
You Grade The Music
2 ratings
You have rated this
What's your reaction?
I Love It
71%
Cool
29%
It's OK
0%
What?
0%
I'm Sad
0%
I Hate It
0%
You might also like
Progressive MetalRock
Editor
A-
REVIEW
Once Human  Scar Weaver Review
Editor
A
User
A
REVIEW
Foxbat Rotgut Review
Editor
A-
User
A-
REVIEW
Making Known the secret, Organized Chaos’ Divulgence
Editor
A
User
A+
REVIEW
Skarlett Riot, Regenerate is intense!
Comments
Leave a response