Larry Ham is a pianist, composer and arranger that began his professional career with Lionel Hampton. As a United States Department of State Jazz Ambassador, Larry toured eleven West African nations in a cultural exchange program. He was the pianist and musical director for the New York Tapdance Festival, also touring the United States and Russia, Greece and Italy. He appeared at the Kennedy Center and at Zankel Hall (Carnegie Hall) with Catherine Russell, and in Prague. This year has also seen performances at The Montreal Jazz Festival, The Rochester Jazz Festival, The Cape Cod Jazz Festival, and the New Jersey Jazz Fest.

Woody Witt is saxophonist, a skilled composer, and an influential jazz educator. On the tenor, Woody displays a mastery of modern mainstream jazz. Since 2003, he has taught fulltime at Houston Community College, has been an Affiliate Artist at the University of Houston, and has traveled the world conducting workshops and master classes including in Houston, Alabama, New Mexico, Alaska, California, New York, North Carolina, Georgia, France (including Paris), throughout Asia and Taiwan. He has collaborated with such greats as trumpeters Randy Brecker, Tim Hagans and Jim Rotondi, saxophonists James Moody, David Liebman and Tim Armacost, trombonist Conrad Herwig, pianist Mark Levine, drummers Louis Hayes, Adam Nussbaum, Billy Hart, and singer Nancy King. Earlier this year Woody Witt resumed the responsibility of booking and being the artistic director at Cezanne, Houston’s main jazz club.

Together they have teamed up to bring us the Larry Ham/Woody Witt Quartet. The two have co-lead a project that is bound to turn jazz fans ears onto their unique sound that combines tradition with a forward reaching sonority.

Presence, a quartet outing comprised of: Witt on saxophone, pianist Ham, bassist Lee Hudson and drummer Tom Melito. The quartet performs four Witt originals, three Ham originals and two arrangements of standards. Presence, is Witt and Ham’s first recording together, the pair decided to record after a successful eight-day tour throughout New York. The resulting music is a combination of well-written compositions and arrangements that feature improvisations that are melodic, while still creating energy, that features a modern jazz flavor.

Our favorite track is “Bleeker Street.” The head has all the elements of a great modern jazz composition; a singable melody that has influences of bebop, band hits, modern harmonic movements, and structures. Although the form is AABA, which is based in the tradition, the 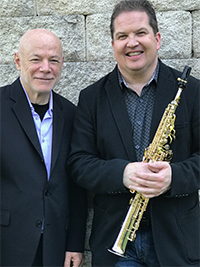 composition’s harmonies and movement give it a modern flair. Witt’s solo is moving, but melodic. His tone is big and round with that perfect tenor saxophone “buzz” to it. Ham’s solo is a study in developing melodic fragments into a musical statement. His playing has elements of bebop, as well as a strong command of the modern pentatonic colors. Put all of this over the swinging pulse of Hudson and Melito and you have a killin’ modern jazz selection.

Presence is an excellent album performed by a group of musicians that are enthusiastic and explorative in their approach to the modern jazz language. The nine tracks cover various moods; from introspective ballads to swinging selections to soulful sounds, Presence has it all. Ham and Witt are both masterfully convey concise musical statements during their solos and each line is full of emotional energy.

Individually the players are all equally masterful, but together the group sound soars to new heights.  A balanced and well-oiled ensemble, that knows how to make their Presence be felt.

Report Card
C.U.R. Grades
You Grade The Music
Rate Here
Originality
A-
A
Execution
A
A
Sound Quality
A
A
Production
A
A
Solos
A
A
Compositions
A
A
Arrangements
A
A
Ensemble Sound
A
A+
Art Work
A-
A
Use of Various Styles
A
A
Virtuosity
A
A
Groove
A
A
Feel
A
A+
Melodies
A
A+
A
C.U.R. Grades
A
You Grade The Music
3 ratings
You have rated this
What's your reaction?
I Love It
82%
Cool
18%
It's OK
0%
What?
0%
I'm Sad
0%
I Hate It
0%
You might also like
Jazz
Editor
A
REVIEW
Yukimi & Harvie S New York Memories Review
Editor
A-
REVIEW
Hinda Hoffman Meets Soul Message People Review
Editor
A
REVIEW
Damani Phillips No More Apologies Review
Editor
A
User
A+
REVIEW
Connie Han Secrets of Inanna Review
Editor
A
REVIEW
Blue Muse It Never Entered My Mind Review
Comments
Leave a response