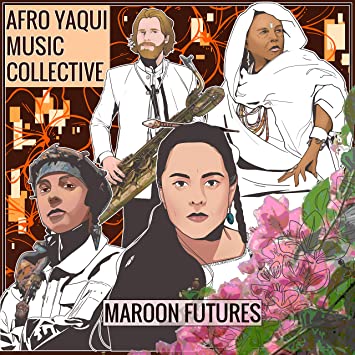 Afro Yaqui Music Collective is a world music ensemble drawn together in response to the rapidly changing political climate of immigrants and climate change. Collectively, the ensemble has a mission of using music to develop a dialogue with activists across the world. They have performed and worked with social movement leaders in Iraqi Kurdistan, Mayan, and Yaqui communities in Mexico and Tanzania. They also performed at ASCAP’s 2018 Jazz Awards, at the Kennedy Center, and at universities. They constantly volunteer at fundraisers for immigrant rights and performed at the US-Mexican border to protest human rights abuses in 2017. They put “their music with their mouth is” and believe in the power of the arts to unite communities to build a movement that moves. Robin D. G. Kelley, author of Thelonious Monk: The Life and Times of an American Original, explains the future, “The Afro Yaqui Music Collective is nothing short of pure, uncut sonic radical love.  These extraordinary artists have returned this thing called ‘jazz’ back to its real roots—to the earth, the sky, and the women who produced and protected a people’s culture. Ben Barson, Gizelxanath Rodriguez, and the crew have committed to making liberation music—which is to say, music without borders or boundaries; future music from the well of the past that’s always on time; joyful music that swings and sings and sometimes stings but always keeps us dancing toward freedom. Follow them. Don’t miss them. An encounter with the Afro Yaqui Music Collective may be the most inspiring musical experience of your life.” Maroon Futures  is Afro Yaqui Music Collective’s latest album. 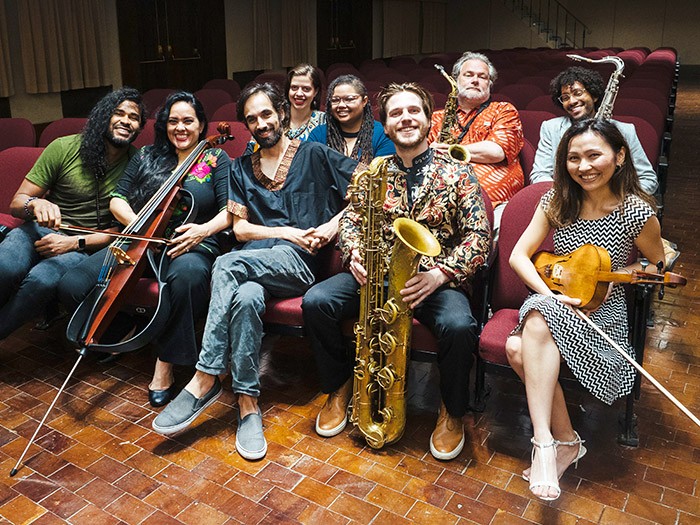 the evils of the built world being erected on genocide and slavery to the protective bosom of the natural world. The songs emote love, camaraderie, women’s empowerment (what we call revolutionary matriarchy), and the indomitability of the Maroon fighting spirit. This album is dedicated to Russell Maroon Shoatz, known to his friends and family as “Maroon,” a political prisoner who has been incarcerated in the state of Pennsylvania for fifty years, with thirty years in solitary confinement. Maroon was released into the general population in 2014. Bandmembers contribute to the campaign to free Maroon through compassionate release through the office of Pennsylvania Governor Tom Wolf. Each of the tracks relates to causes that Maroon cares deeply about and writes on often: social justice, antiracism, women’s empowerment, and the struggle for a livable planet.

“La Cigarra” is a Raymundo Pérez y Soto composition that is arranged by co-leader and baritone saxophonist Ben Barson. With jazz and traditional Mexican music elements, vocalist Gizelxanath Rodríguez sings the melody with fluidity and charm. John Bagnato plays inspiring nylon guitar fills around the theme to add interest. Roger Romero- plays a rhythmically diverse saxophone solo. The bridge has beautiful vocal harmonies with building band hits and a return to the introduction theme. Rodríguez’s vocal range and sustain are showcased throughout the well-written arrangement.

“Ya Habibi” combines the sounds of world music with hip-hop, with Nemma Nefertiti joining the ensemble as EmCee. The horns dance on the funky groove as Barson adds beautiful baritone fills. Nefertiti’s rhythm matches the track, and the many layers of horns and vocal harmonies by Rodriguez and Charlotte Hill O’Neal create a multitude of sounds to carry the song forward. Randraiz Whearton’s keyboard sounds and accompaniment are deep with character, and the saxophone solo is building and energetic. The combination of Hip-hop and 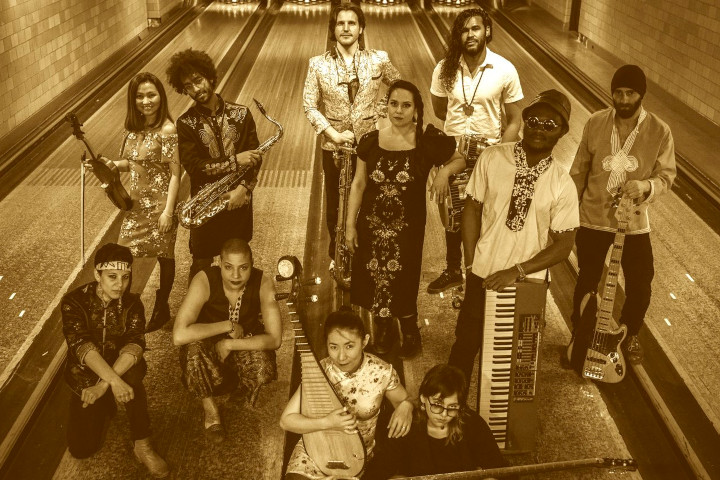 jazz-funk is a beautiful thing.

Afro Yaqui Music Collective is making music with a cause, and Maroon Futures shows that they are making music that promises a way out. The album’s theme delivers an approach of love and understanding to the climate of anxiety with clear eyes and purpose instead of dissonance and dread. But most of all, the ensemble works to solicit a strong emotion through the six selections.  The effortless singing, the intricacy of the various instruments from around the world, and the shared mutual conviction of the band are all parts that unify the whole.

Report Card
C.U.R. Grades
You Grade The Music
Rate Here
Originality
A
A+
Sound Quality
B
A+
Solos
A
B-
Compositions
A
A+
Arrangements
A
A+
Ensemble Sound
A
A+
Vocal Quality
A
A+
Vocal Harmonies
A
A+
Art Work
B+
A+
Groove
A
A+
A
C.U.R. Grades
A+
You Grade The Music
1 rating
You have rated this
What's your reaction?
I Love It
100%
Cool
0%
It's OK
0%
What?
0%
I'm Sad
0%
I Hate It
0%
You might also like
World
Editor
A
User
A+
REVIEW
IFIHADAHIFI The Dryad Review
Editor
A
REVIEW
Arooj Aftab Vulture Prince (Deluxe Edition) Review
Editor
A
REVIEW
Radha Botofasina Carry On Spirituals Vol. 2 Review
Editor
A
User
A+
REVIEW
Kane Mathis Geminus Review
Editor
A-
REVIEW
Sauti Sol Midnight Train Review
Comments
Leave a response