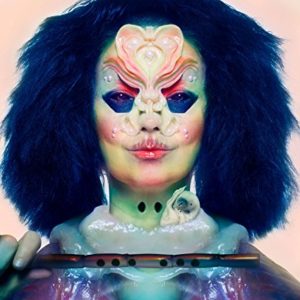 Björk’s music has been the subject of much analysis and scrutiny over the years. Many often agree that she constantly defies categorization in a musical genre.  Although she often calls herself a pop artist, she is also considered a restlessly experimental creative force and therefore, some consider her experimental. Björk’s soprano vocal has been described as both “elastic” and “somersaulting” in quality as well as having been praised for her scatting ability, unique vocal stylings and delivery. The 52-year-old vocalist still uses electronic dance beats with a full-blooded raver’s passion and the elemental timbre of her voice has grown more powerful with age. Björk has been known to reach notes beyond the seventh and eighth octave through her use of reverse phonation.

Björk’s latest and ninth studio album, Utopia, is an audible journey into her whimsical and sonic dream world. Undoubtedly one of her best releases, flutes and bird songs carry you throughout the fourteen tracks, only two of which are fewer than four minutes in length, with some lasting ten minutes. Produced and recorded between Reykjavik and New York, with co-producer Alejandro Ghersi (ARCA). Commenting on Utopia Björk stated: “If you feel this world is not headed the right way, you have to be D.I.Y. and make a little fortress.” The album showcases her brilliant vocals and sense of wonder. Björk additionally states; “Maybe that’s why it became a utopian theme. If we’re gonna survive – not on my personal drama, but also the sort of situation the world is in today, we’ve got to come up with a new plan. If we don’t have the dream, we’re just not going to change.”

Our favorite track is “Blissing Me.” Mythical and fantastical, as she conjures a pastel hued world with vocals and sounds, Björk’s ballad 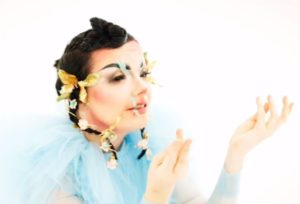 showcases her brilliant vocals and sense of songwriting. The vocal counterpoint is wonderful, challenging the listener to take in a wide array of sounds and musical lines. The lyrics show elegance and passion from an artist who has created her own private world in reaction to the one she exists in.

Björk is still challenging herself and her listeners, and that is what makes her so fascinating and fun to listen to, and that accomplishment deserves credit. Utopia builds on the abstract, yet still maintains a cohesive musical flow and identity. Björk’s vision and expression through her music is moving. Her song calls to us to take the embracing leap into her idyllic land, with soaring layered vocals and a steady sonic burst of surrealism. Utopia will unfold its sonic secrets upon repeated listens, lightly, strangely, and cerebrally, just like Björk, strangely beautiful.

Report Card
C.U.R. Grades
You Grade The Music
Rate Here
Originality
A+
—
Design
A-
—
Sound Quality
A-
—
Production
A
A+
Songwriting
A-
—
Vocal Quality
A
A+
Art Work
A+
—
Intonation
A-
—
Melodies
B+
—
A
C.U.R. Grades
C-
You Grade The Music
1 rating
You have rated this
What's your reaction?
I Love It
0%
Cool
50%
It's OK
0%
What?
50%
I'm Sad
0%
I Hate It
0%
You might also like
Pop
Editor
A
REVIEW
Rhys Lewis Corner Of The Sky Review
Editor
B+
REVIEW
Olly Murs Marry Me Review
Editor
A-
User
A+
REVIEW
Zella Day Sunday In Heaven Review
Editor
A-
REVIEW
Lauv All 4 Nothing Review
Editor
B+
REVIEW
Francisco Martin hate you to love myself Review
Copyright © 2023 Chalked Up Reviews, All Rights Reserved.